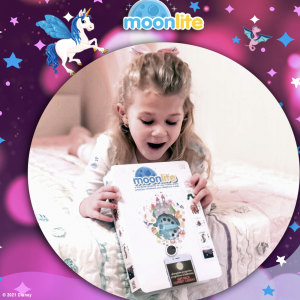 Moonlite was born when a mother and former Google veteran decided to launch a Kickstarter campaign. Inspired by her daughter’s love of shadow play, she set out to create a clip-on reel that attaches to almost any smartphone and projects vibrant story images onto the ceiling or wall using the flash of the phone.

After the project reached its funding goal, Venerate Media Group (VMG) was brought in to turn a Kickstarter idea into a mainstream phenomenon through digital marketing.

We used a multifaceted approach, including email and social media marketing and paid ads. We began by auditing the existing marketing efforts to identify areas of improvement and introduce a new multi-platform strategy.

We optimized Facebook spending and accelerated the outreach with omnichannel (YouTube, TikTok, Retargeting) advertising campaigns. By doing this, we were able to deliver a cheaper cost per outcome, while simultaneously creating a 52% increase in the number of shop visitors and a 47% increase in conversion rate, a 79% increase in total orders, and a 105% increase in total sales.

Once we realized that the email list was the size of over 530k with the delivery rate below 100%, we adjusted the language to make sure the content would reach its entire audience.

We then combined the new more engaging language with segmentation lists to increase the open rate from 7-8% to 35%, well above the average email open rate that usually ranges between 12-25%.

Finally, we made all promotional email campaigns more impactful after noticing a number of visitors adding items to the cart and not checking out. By sending a “reminder” email on day 3 and keeping the promotions within a 4-day window, sales – which would drop on the second day – stayed on a consistent bump during the entire time of a promotion.